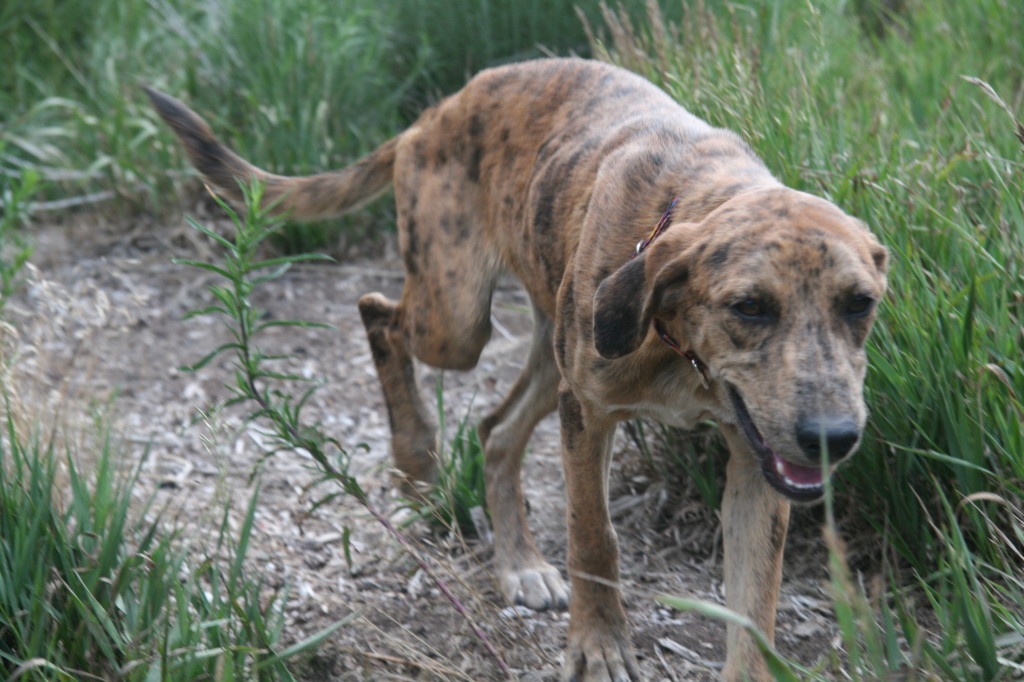 I’ve been alone out here in the mountains this week while Rhonda has been in Dallas working.  With our brood of eight animals someone has to stay behind and manage the clan.  That someone is me.  This is an every couple of week stint for us.  Rhonda goes to Dallas, and I stay at the Dusty Dog managing the load myself.  Woe is me right?  Fresh mountain air, chilly mornings and nights, sunny days with rainy afternoons, peace, and quiet.  Normally, it’s pretty uneventful out here other than a lot of chores – constant dish washing, composting, watering our untamed garden, keeping up with an inordinate amount of dustballs, and watching the meadow for signs of wildlife.  Believe me, watching the meadow takes a lot of time.

This week has been a horse (or a dog) of a different color.  Tuesday evening I was rearranging some furniture to accommodate a new pine table my neighbor Vickie gave us, and out of the corner of my eye I saw something moving outside my back door.  At first, I thought it was a tiny coyote, but quickly realized it was a really skinny, scared, and crying dog with it’s tail between it’s legs and not even close to the color of a coyote.

I have never technically rescued a dog all by myself.  I’m usually the nay sayer when a dog needs rescuing, reminding Rhonda that our inn is at full capacity.  No vacancy whatsoever!  But, this situation was different.  This is the wilderness, where coyotes, mountain lions, and bob cats are abundant and an on the verge of starvation dog was pacing and crying outside my door.  No exaggeration!  Starvation.  How could I turn my back on this poor creature who might not make it though another night alone in the wilds of Northern New Mexico?  I wouldn’t be able to live with myself if I found her chewed off leg up my mountain a couple of days from now.  I say this because on Sunday morning we found a baby deer hoof up on our mountain.  I have the broken off hoof in my sacred bone pile but won’t torture you with a photo.

So, back to the stray dog starving to death outside my cabin door…I wasn’t sure what to do, so I started calling people.  My neighbors recently helped a homeless woman by letting her stay in their extra cabin, so they were the first people I called.  I figured if they helped stray people they may help stray animals too.  Wrong!  She was compassionate and concurred with me that we can’t boil the ocean, but she didn’t offer to help with the starving to death dog. 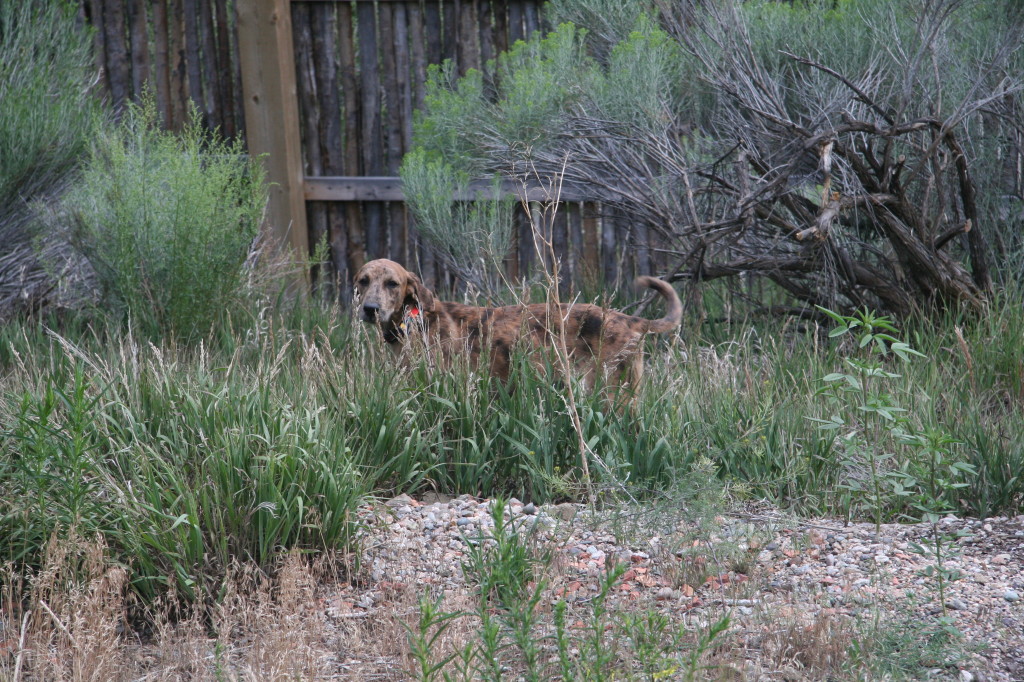 Next, I called the queen of animal rescue – Rhonda, who without hesitation said, “You have to get that dog.  She won’t survive on the mountain.”

And, thus began my first solo animal rescue.  With the help of some canned tuna, I lured the starving to death dog into our fenced yard, and waited for her to come to me.  It was a long wait – we didn’t actually get acquainted until the next morning when she finally came to me and let me pet her.  She remains very frightened and timid, but has been to the vet where she’s gotten a good bill of health other than having fleas and being nothing but skin and bones.  The vet said she’s about five months old and a catahoula mix.  Cata who? Turns out catahoulas are a mixed breed dog developed in Catahoula Parish, Louisiana.  Is it a sign that a cajun dog showed up at my back door in New Mexico?  Might be – I’m still working this out in my head though trying to figure out what the sign might mean.  I don’t think the sign is that she is supposed to become one of the Dusty Dogs though. 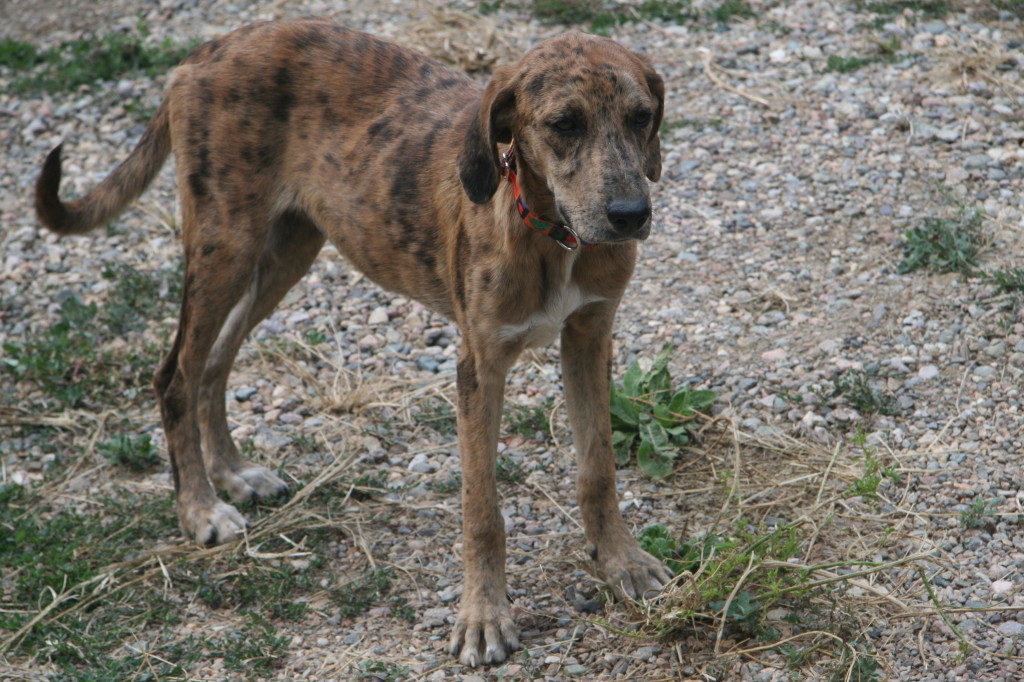 I’ve named her Mabel (after one of my favorite historic Taos figures, Mabel Dodge Luhan) and introduced her to our dogs and cats.  So far, so good.  And, I’m trying to find her a home since we have no vacancy.  None!

Needless to say, Mabel and my own tribe of eight have kept me really busy this week, and I didn’t get around to the cooking I had planned.  Sometimes we just have to be flexible and go easy on ourselves.  I mean after all, I did rescue an almost starved to death dog.    The only thing I’ve cooked this week is a whole lot of hummingbird food. 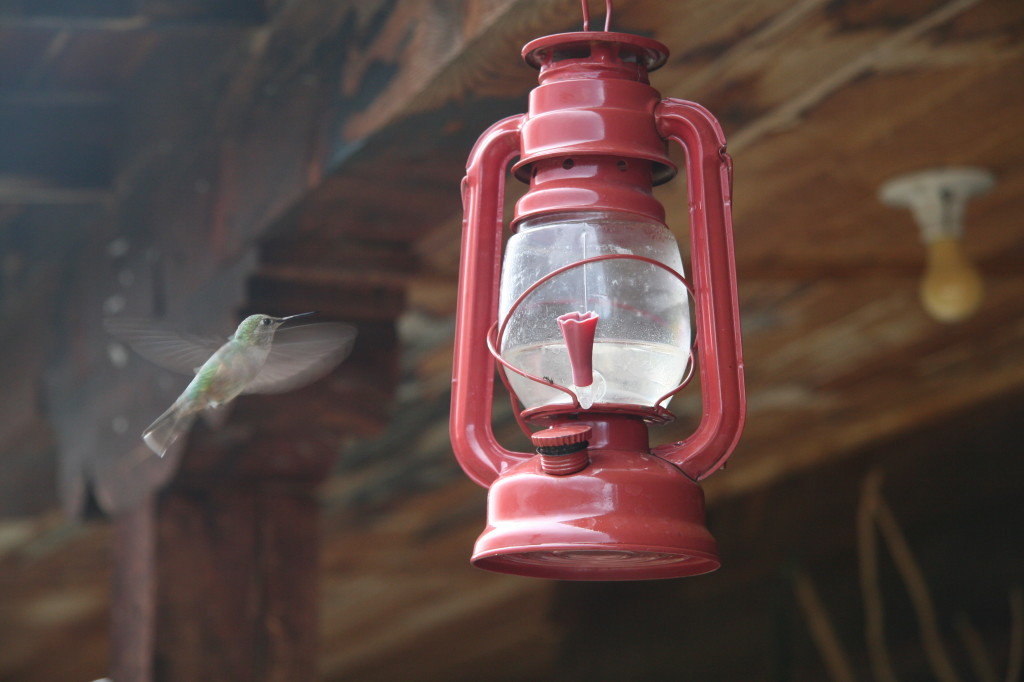 I was at my people rescuing neighbor’s the other night for dinner.  We started talking about hummingbird food.  Riveting conversation right?  Wrong, but I realized not everyone knows how to make this simple syrup when one of the other guests said, “Oh, you actually have to cook the hummingbird food?”

Yep, you cook it.  So, this week’s recipe is for hummingbird food.  They like it much better than the red juice you can buy in the big plastic jug at the grocery store or garden center.  It’s easy to whip up and makes me feel like I’m doing something good for my hummingbirds – getting them off red dye and all.  But, before I get to the recipe let me tell you about the bears.  It has been a very active week for meadow watching.  Four different times, I spotted a large black bear meandering along in the meadow minding her own business.  The other night I watched a smaller black bear in the woods bordering the meadow, as she flipped over logs and clawed at them searching for insects.  I realized that the noise created by all of her clawing and shredding is not a large elk eating outside my window, which is what it sounds like in the dark of night, but a bear foraging for food across the street. 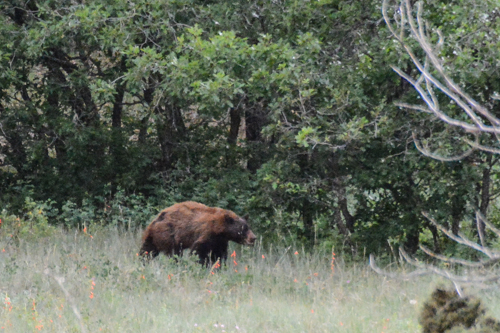 Mabel, the hummingbirds, and the bears are keeping me company while I wait for Rhonda to come home to the mountains.  While waiting, I’m hoping a family comes along to adopt Mabel.  And, I’m really hoping the next time I’m home alone in the mountains that no surprise visitors show up.

Put the sugar and water into a large pot and bring to a boil.  Turn off heat and let cool before filling your hummingbird feeders. 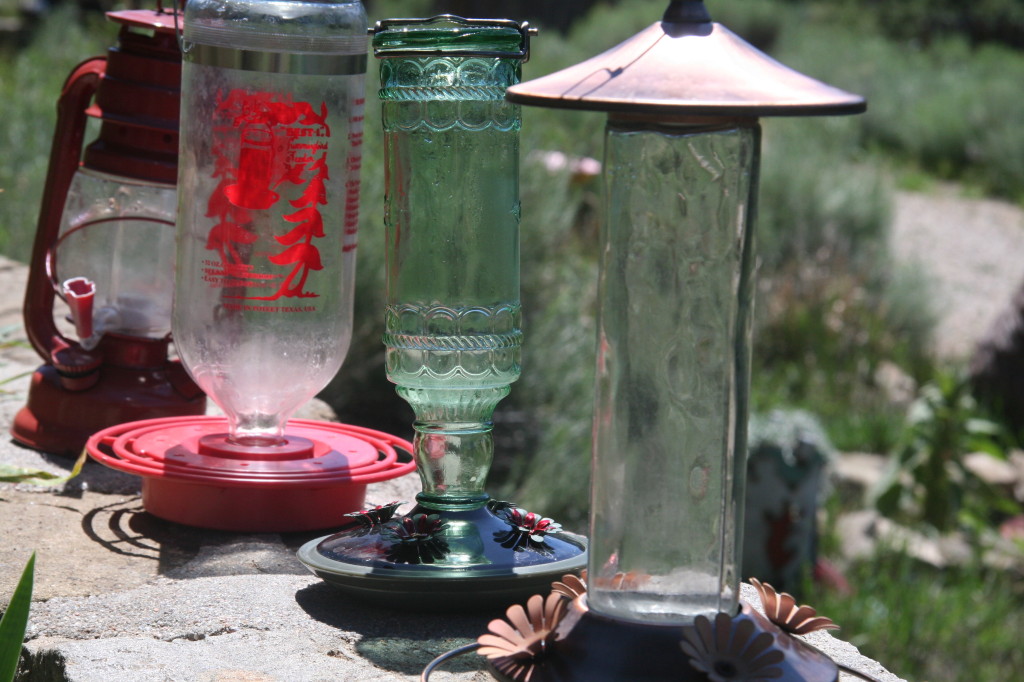 Note:  I make 16 cups of hummingbird food at a time.  It’s enough to fill my four feeders plus an old plastic gallon jug.  It keeps in the refrigerator for up to a week.

Mabel still needs a new home.  She’s made herself quite comfortable now that I’ve been letting her come in the house, but this can’t be her forever home. 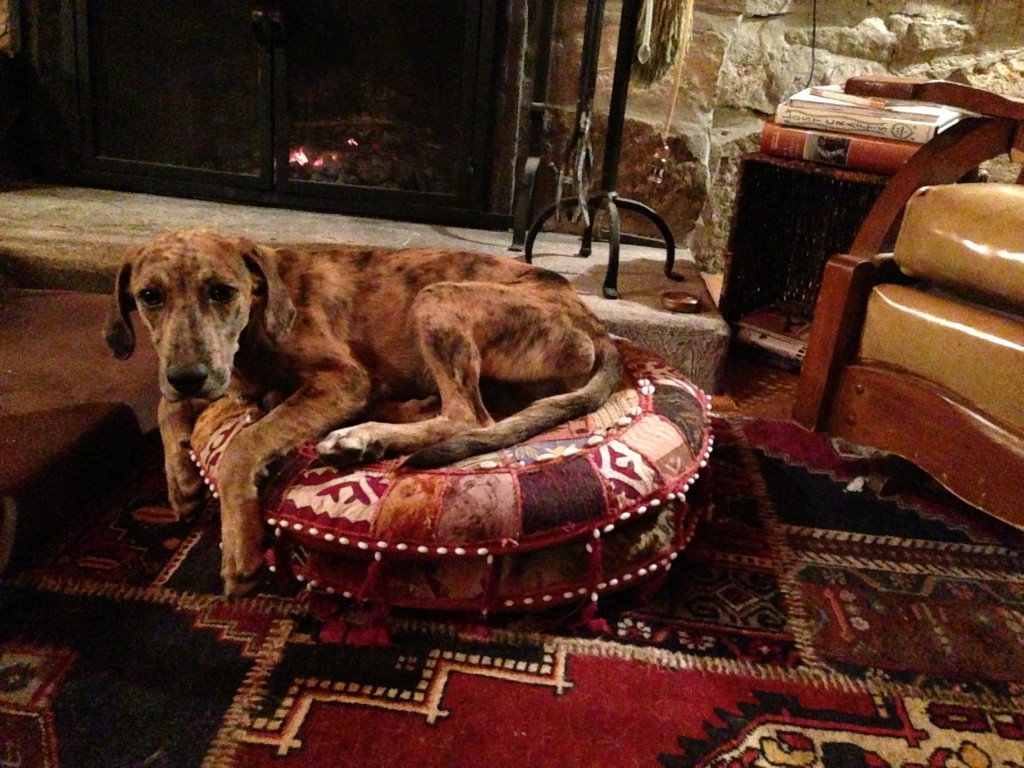 I'm a homegrown cook sharing recipes and other great stuff about food from all over the world.
View all posts by Lisa Orwig →
This entry was posted in Miscellaneous, Quick & Easy, Recipes, The Dusty Dog, Uncategorized and tagged Black Bears, Catahoulas, Easy & Quick, Hummingbird Food, Hummingbirds, Nature. Bookmark the permalink.